I finally have an Ultronic! 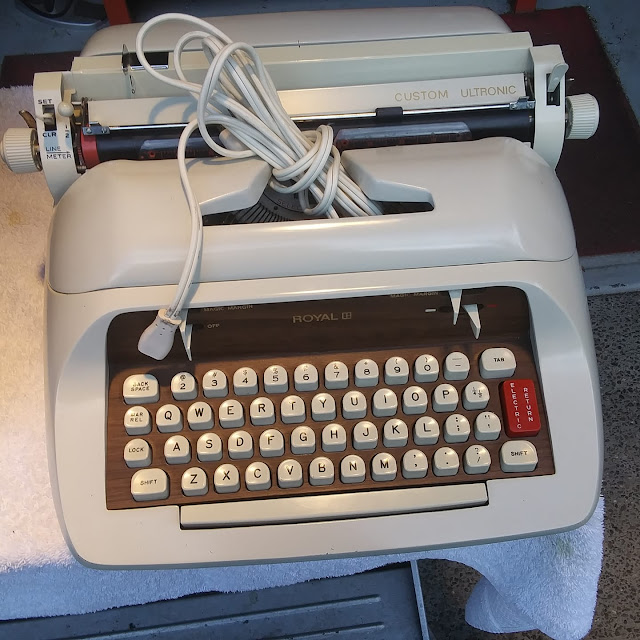 Popular posts from this blog

September 10, 2018
My new book, Portable Typewriters , is out! I will be releasing a lower-priced black-and-white copy soon. It is available in paperback and Kindle. This was a project that took two years, and two laptop computers to accomplish. (My first draft and laptop was lost to a kitchen sink...but I was able to rebuild my draft!) https://www.amazon.com/dp/1727184084/ref=sr_1_2?ie=UTF8&qid=1536640691&sr=8-2&keywords=bodemer
Read more 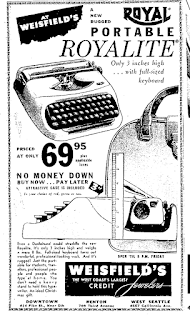 Advertisement for the Royalite. From the Seattle Times, 12/14/56 In 1954, Royal McBee corporation purchased an emerging typewriter manufacturer from Holland, who only made small portable typewriters, which were known as Halberg Travelers. Very few Halberg-labeled typewriters were made; most are found under the name Royal. Royal altered the design of the Traveler--the gull-wing ribbon covers were removed, as was the console carrying case, which was similar to that of the Smith-Corona Skyriter. These were replaced by a removable ribbon cover, which stretched down the sides of the machine, and a zippered carrying case, which was made of vinyl. They were sold under a new name: Royal Royalite.  1962 Royalite. Author's Collection While the earliest Royalites were one-tone green, later models could be found in two-tone gray, or in a special name variant, called the Eldorado, in black and gold. These typewriters came in vinyl attache cases. For 1963, the zippered carrying
Read more